My soon to be released single, “Conquest (feat. Marc Levine)” has been nominated for the 2011 Hollywood Music In Media Award (HMMA) under the Classical/Orchestral category. 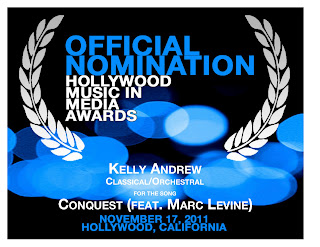 This year’s Awards Event will take place on Thursday, November 17, 2011 at the Highlands in the Kodak Theater Complex in Hollywood, California.

A little background about HMMA: The event recognizes and honors the music of visual mediums, the talented individuals responsible for creating and selecting it, and the music of both mainstream and independent artists from around the globe. HMMA is the first music awards event to recognize and honor excellence in music supervision and to place video games along side TV and film in terms of importance. Iconic artists will also be presented with a variety of awards, including an award for Outstanding Career Achievement in honor of their accomplishments and longevity in the entertainment field. The evening features live music performances, celebrity appearances, award presentations, an exclusive VIP reception, and a banquet dinner. The entire event will be shot with multiple HD cameras for digital and cable broadcasts in 17 countries and U.S. territories (120 Million households).

It’s been a blessing to receive this nomination. Please send me your wishes and good luck charms as I will continue to cross my fingers to hopefully win in the Classical/Orchestral category!